A V-plotter. Basically a vertical printer. It allows you to draw images very precisely on bigger surfaces, such as a wall or a window.

Why did you make this?

Because we can. Or, to be precise, because DIY master Joram van Loenen can. Out of his interest for form and technique, he started his own research & development project. He drew the plotter parts and cut them out of MDF. He assembled them together with two water bottles and a Buddha statue (as a contra weight for the marker) and placed it up against a whiteboard. The V-plotter is controlled by a mini computer. The plotted drawings can exist out of outlines, or raster (Bitmap).

A bitmap is an image built up out of bits. The image is described ‘bit by bit’. It is a way how the image can be saved and shown digitally. Outlines (or vectors) are images mathematically described (opposed to ‘bit by bit’), this is why they can be scaled infinitely 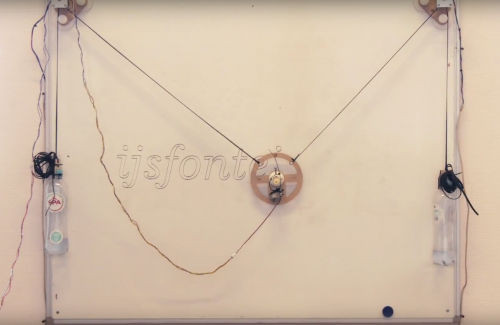