The historian Johan Huizinga already knew in 1938 that “man is first and foremost a creature that plays”. At IJsfontein, we have been working for 25 years on the basis of this principle for clients from various sectors to develop interactive programmes that allow people to learn through play. What began in 1997 with a computer game about the laws of nature developed by two students is now a media company that specialises, among other things, in the development of interactive play areas for museums. In the field of exhibition design, IJsfontein has developed a unique expertise in creating comprehensive exhibition games. With the development of these play areas, we are taking a new step in exhibition design. Games are no longer a separate part of a larger exhibition, but we incorporate the narrative of an exhibition in one comprehensive game in which the public participates as players.

In recent years, we have developed play areas in cooperation with clients both national and international. For the Dutch National Archives, we created an exciting journey of discovery through an archive of stories. And for the Open Air Museum, we translated the particularlies of the history of the Netherlands in The Canon of The Netherlands into an interactive and visual story for the whole family. 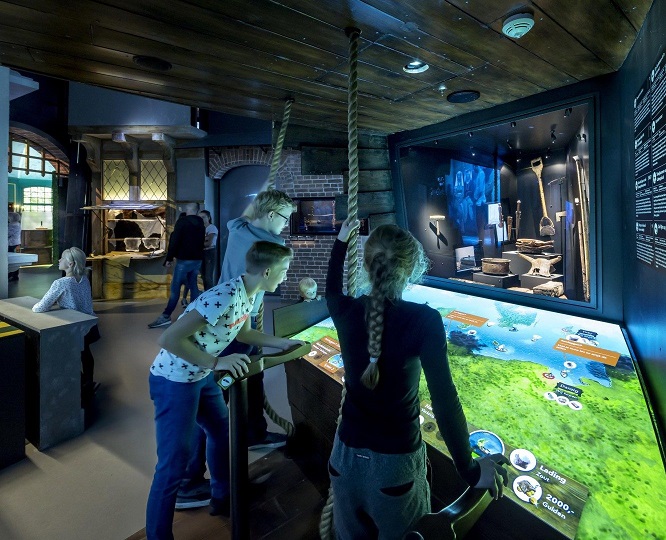 Currently, we are finalising a game space for the Literature Museum on young-adult literature and working on a research game for the Viking Age Museum in Oslo.
By allowing the public to participate in an interactive environment, participants themselves explore the world around the subject. Key concepts in the creation of these exhibition games are curiosity and amazement. Detailed information transfer plays a role only in the background.
By turning an exhibition into an all-encompassing game, we create an immersive experience that has more impact than an exhibition space with text signs or an exhibition with separate game components. We believe that we can increase the involvement of the audience through games, in which incentives such as winning and losing, beginning and end, play a central role, and that we can thus motivate visitors intrinsically to find out more about a subject.

In the play areas created by IJsfontein, we combine a story with a game. Unlike in a static narrative exhibition, the story is not given to an audience, but they participate in the story. It is not about viewing and admiring, but about being part of an experience. In the game space, a world comes to life in which the player’s actions determine the course of the story. You find out more as you play. The extent to which a story is given or more open-ended is determined by the learning objectives, the nature of the story and the client’s wishes.

When creating a story for an exhibition, it is important to leave out information. To get to the essence. What part of the story do you want to tell? Finally: the less you tell, the more you remember. It is not the transfer of detailed information that IJsfontein takes as its starting point for the projects we realise, but the understanding of basic principles and the stimulation of interest in the subject. At the same time, appealing details are the building blocks of a good narrative for a game. Together with the client, we look for the right balance.

In every project, we look for an approach to a subject that resonates with the perception of the audience. We do this by carefully mapping out the exhibition’s target group in consultation with the client. In cooperation with the Literature museum (The Hague), for example, we have realised an exhibition about young adult literature. A game space in which young people get acquainted with literature on the basis of the content of stories contained in books. In the game space ‘Backstreet’ we show young people that literature is about the things they themselves are doing. In various game assignments, we bring young people into contact with the themes of books and we want to encourage them to think about themselves on the basis of these themes.

For the future Viking Age Museum in Oslo, we are creating an environment where the public can do their own research into Viking history. In doing so, we do not put the information about the objects first, but try to interest participants in the users (persons) of those objects by means of assignments. In this game, we place participants in the position of researcher. The players make their own discoveries and experience the complexity of the research. At the same time, they experience the pleasure of their own discoveries and interest in the research profession is aroused.

IJsfontein’s play areas are a new step in the development of exhibitions as narrative environments. In the play area, the story of the exhibition has a more open character, because the course of the story depends on the actions of the player. Participants are immersed in a game experience and thus made curious about a subject in a playful way. The game spaces increase the involvement of the public with the theme of an exhibition and often arouse wonder about the subjects they deal with. 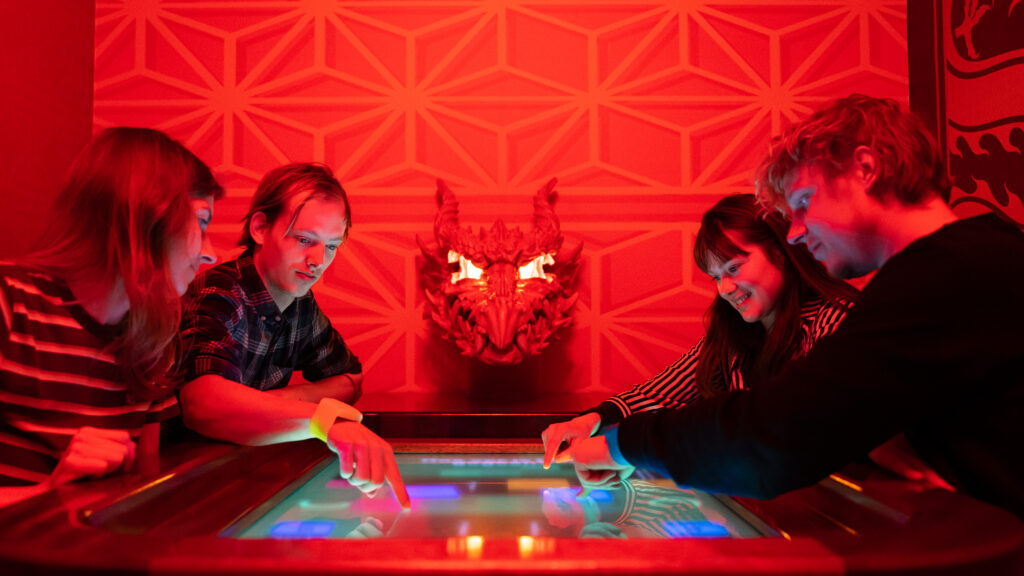