The Netherlands is a world leader when it comes to the development of ‘serious games’, i.e. digital games designed to teach players certain skills or know-how. It is no coincidence that the Netherlands should be so prominent in this field. It’s a logical extension of Dutch culture.

Singapore’s famous Orchard Road district will soon see the erection of the Scotts Tower, a newly-to-be-built structure which will seem to be balancing on stilts and will provide its inhabitants with roof terraces, swimming pools and gardens. The tower was designed by Dutch architect Ben van Berkel, who also co-designed Singapore University of Technology & Design (SUTD). Van Berkel’s residential tower is simply begging for an interior featuring at least one example of Dutch design. A Viktor & Rolf dress with a bow, perhaps, or rather some Dutch design by Droog? Perhaps Marcel Wanders’ knotted chair would be an option?

Our creative industry is world famous. It produces items which are light-hearted and amusing, making playfulness our trademark. One could even say that being playful is part of our national culture. The well-known visionary Desiderius Erasmus inculcated it in our national DNA.

Learning in a playful manner

Erasmus (circa 1467-1536) was a priest, theologian, philosopher, author and humanist. Erasmus’ work focuses on man rather than on the church or the state. In his works, Erasmus dealt with all aspects of society. His most famous work, The Praise of Folly, is a merciless but funny takedown of the establishment. Among other institutions, Erasmus criticises the Catholic Church in the book. The Praise of Folly broke new ground; it paved the way for the Reformation, the sixteenth-century religious revolution which led to the establishment of the Protestant churches.

Erasmus also wrote many pedagogic and educational works. In a book called On the Obligation to Raise Children At Once and with an Open Mind, he posited that ‘man is not born but made man’. In Erasmus’ opinion, children do not just grow into ‘useful components of society’. They must be raised and taught from a young age. Erasmus was of the opinion that children should be treated honestly and respectfully. He also felt that it was better to encourage them than to punish them. He was convinced that a positive attitude helps children develop more quickly and also helps them gain a better understanding of right and wrong. Children learn best if they are intrinsically motivated. Therefore, according to Erasmus, teachers should teach their students in a way ‘which does not leave the children feeling like they are working, but rather like they are playing games’.

Erasmus’ ideas on education were revolutionary in his day. In the Middle Ages, education was generally marked by corporal punishment and extreme discipline. In our own day, Erasmus’ principles – encourage children, do not push them too hard, allow them to learn in a playful manner – have found a fair degree of acceptance in many parts of the world.

Erasmus was not the Netherlands’ only key figure in the field of play. Following in his footsteps was another major player: Johan Huizinga. This historian, anthropologist and cultural historian (1872-1945) unfolded his theory on man, the player, in his book Homo Ludens (‘The playing man’). Man thinks, creates and plays. However, according to Huizinga, man is first and foremost a player. Everyone loves a good game. As Huizinga saw it, playing is a voluntary activity played in accordance with well-known rules, which provides a source of excitement and fun. In order to be able to play, people need a space where they can feel safe. This can be any kind of space, ranging from an arena or stage to a gaming table, temple or magic circle.

Games are necessary for the creation of society

It’s a good thing that people like to play games, because playing games allows us to build and develop a society. In Homo Ludens Huizinga convincingly shows that games – fun things – are necessary for the creation of society. By giving his readers a whirlwind tour of world history, he demonstrates that essential components of our culture – the administration of justice, the arts, sports – can be traced back to centuries-old games. He published his theory to much acclaim, both from the Netherlands and from abroad. He was even nominated for a Nobel Prize.

Huizinga and Erasmus in practice

What legacy have these two influential theorists left in the Netherlands? Learning in a playful manner means that people learn new things in relaxed and ever-changing ways. They encounter new challenges all the time and are allowed to make mistakes. Playing games is all about making mistakes. Games are all about excitement, challenges, mastery and victory. Such a combination of ingredients inspires children and adults alike to keep playing and developing. As Huizinga wrote back in the day, everyone loves a good game.

The key to playful learning – being allowed to experiment and feeling free to make mistakes – is an integral part of Dutch culture. It starts with the parents, who are relatively un-authoritarian. Dutch children are generally allowed to speak their minds and to address their parents in an informal way – sometimes even by their first names. This informality is also a hallmark of Dutch schools and the Dutch business world. Everyone is considered equal in our country. Everyone is allowed to have an opinion, and everyone is allowed to make mistakes. It is this which makes the Netherlands Europe’s playground, or maybe even the world’s playground.

It should therefore not come as a surprise that the Netherlands is busy experimenting with new types of education. Types of education befitting our times, which make optimum use of modern technology. Our creative industry is playing a significant part in this process. For instance, look at the many digital games the Netherlands is producing. A good many of these are serious games, i.e. digital games designed to teach players skills or know-how. Out of 330 companies in the Netherlands developing digital games, 57 per cent works on the development of serious games, while 44 per cent focus exclusively on the development of serious games. This percentage is significantly higher than other countries’.

Not surprisingly, the Netherlands is a world leader in the development of serious games and game-based learning. You will not be surprised to learn that the principles of learning in a playful manner, as invented and described by Huizinga and Erasmus, play a major part in this trend. 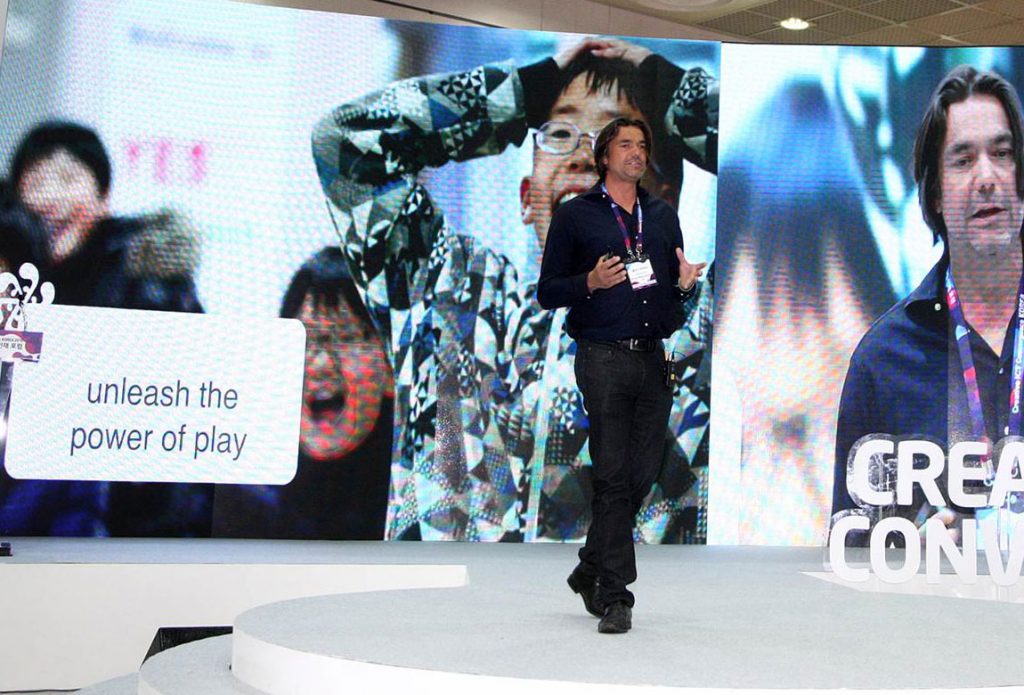